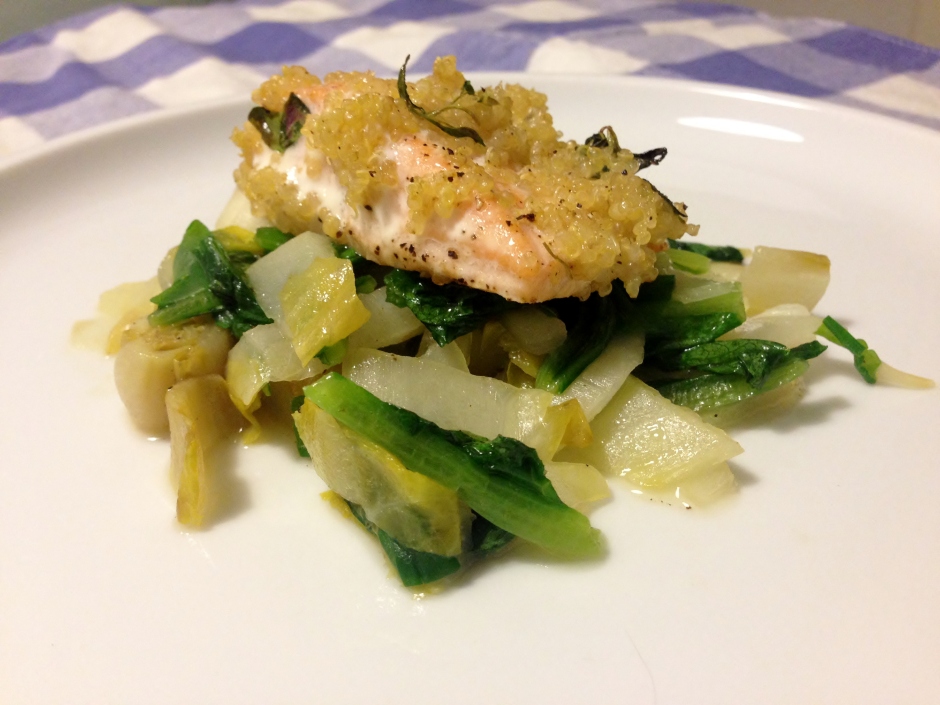 I have probably stated this already before but making Italian dishes from Italian recipes really is also a part-time adventure when it comes to food shopping. Sometimes my attempts here in Helsinki are more successful and sometimes less. I am not sure into which category my latest trial falls (another recipe from the October edition of “La Cucina Italiana“).

My first part of the shopping adventure for this recipe took place in the vegetable section of a supermarket. It was my first time buying endives although I had eaten them before. I spent some sweaty minutes trying to locate them until I discovered that – for some horticultural reasons beyond me – somebody had given a complicated Finnish name for them (I thought the right word would be about the same as in English). Fortunately I was saved by the label of their package which was in English. However, I still don’t remember what the proper, mysterious Finnish word for endives was.

The next challenge was the fish. Although trout is actually one of the few species of fish that can be found in both Italy and Helsinki, it is still not widely available in all supermarkets here. This was also the case in the store that I visited but after consulting its fishmonger, we agreed that salmon was the best substitute available, and I think it did quite a nice job.

Finally, I was scratching my head when trying to understand the sort of quinoa listed for this dish (“soffiata”). My favourite on-line dictionary translated the word “soffiare” as “to blow” with examples such as to blow one’s nose. As preparing the quinoa through my nostrils didn’t exactly sound like one of the most appetizing (and grown-up) ideas, I resorted to just cooking the quinoa as instructed on its package before covering the fish with it. Now that I am less hungry (i.e. have more patience to Google things a bit more thoroughly), I learned that in fact the right translation is “puffed quinoa” which apparently can be bought as such but can also be made at home in a similar way to popcorn.

However, even if I failed to properly source two of the listed ingredients, I had a lovely meal at a little effort! I think I will definitely try this again though with that properly popped quinoa – as well as an English-Finnish dictionary to ensure I rediscover those endives!

Cut the trout fillet into large slices. Season them with 2 tablespoons of olive oil, salt, pepper and chopped thyme leaves. Roll the slices in the puffed quinoa and place them on an oven tray (covered with a parchment paper). Bake at 200C for ca. 10 minutes.

In the meantime, chop the spring onion, lettuce and endives. Cook them on a pan with a splash of olive oil, salt and pepper on a high heat for 5 minutes. Serve with the trout.